I have nothing against Raymond Blanc as a man; he is a fine, passionate chef; he clearly loves his mum, he doesn’t have a silly hair cut to televisually define him (although the accent helps), and I dare say he is kind to animals – apart from those gastropods and mammals whose life expectancy is shortened by the fine diners at the Le Manoir aux Quat’ Saisons .

Raymond Blanc learning the secrets of supersized Garlic from Maman

Indeed, he appears to be that rarity – a Frenchmen I would like to count as a friend – despite his web biography featuring the rather chillingly tautologous lines:Strangely it was the love of people that brought Raymond into restaurants, he arrived in England, in 1972,…By an act of serendipity the Head Chef took ill and Raymond took over the mantle.

My question is what on earth possessed him to get into the branding biz with ‘Brasserie Blanc’? – a kind of McDonalds for the middle classes? True there is a market here, as the denizens of our perfect shires try to recapture the perfect moments of this year’s French holiday by force feeding Harry and Harriet cassoulet (a foodie envelope to disguise their shameful secret that, rather than moules the kids actually prefer beans on toast for tea).
The half-way house that is a brasserie – between cafe and restaurant, should be an ideal playground for us, CBT-wise, to cope with the stress of putting food into our mouths in public.  (Odd that in our perfect shires from Bristol, Cheltenham, Bedfordshire, Oxfordshire, Hampshire and beyond, we have no such reservation about magicking it back up at pub closing time).  But this is the ‘idea’ of a brasserie, managed by scallop counting financial directors and brand agency folk who think a chalky menu, red leatherette seats and a pot of dijon cuts the mustard. 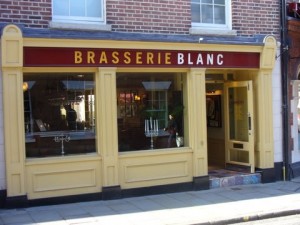 Would you like fries - I mean frites - with that? Blanc Brasserie, coming to a Perfectshire near you soon...?

Like perfectshires themselves, this place has become a parody of what it should represent; “I know” – the agency man says “let’s take some publicity shots, you know a bit Facebook like with some nice Mrs Bosomy-type yummy mum’s having a well-earned break from pilates, and-yes-go-on-I-will have the 175cl glass of wine…”, mix it up with some black-and-white pics of pig trotters (“which of course we’d never serve!”), some sizzling meat for the men, and a food porn pic of a chocolate tart (a sort of foodie replacement for sex toys?), and then watch the demographically targeted punters of perfectshire literally lap it all up.
But in reality there is as much portion control, and as little love seasoning the dishes as your average fast food restaurant – whilst being equally calorific. Even ‘pricing’ set in a reassuringly expensive way to make one feel that it has been a ‘good meal’ and indeed must be better than any cheaper alternative.
I am all for Maman Blanc’s miscellany of salads (“Cucumbers and dill, celeriac salad, cherry tomato and shallot,fennel and coriander, Russian salad of summer vegetables, carrots vinaigrette”); not only is it impressively Scrabble-high-scoring, and more poetic than Andrew Motion’s motions, but probably more literate than most of Brasserie Blancs staff, press ganged in from the local sixth form college to try and pass muster as careerist French waiters. Note to branding agency – some ironic toothpicks & long apron-clad staff do not a waiter make. I really love popping into local eateries for a glass of something nice from Limoux – though being told “that bottle’s open already been opened we’ll use it up first” is discouraging. But what I hate most is the faux ness of it all – there’s no heart, there’s no love, there’s no passion which is why – in many ways, the formula works, reflecting as it does the lack of heart that is dining in perfectshire.